While there are many social networks and professional networking tools that have proliferated over the past ten years, business cards remain to be effectively disrupted by technology.  A business card unifies contact and other information into a condensed, easily shared format.  With business cards being such an important point of connection, it is surprising that they have not yet resulted in a social network independent from other popular platforms, designed solely for exchanging bite-sized pieces of contact information.

Applications:  An online business card is simply a condensed format for sharing contact and other social information.  This need not be limited to business, it could also be used for sharing online presence and contact info for personal use, events, or topics.Due to the broad number of ways that an online business card could actually be used, we decided to call them social cards rather than business cards.  A social card is just a condensed, simple way to share contact information and online presence.  We have designed social cards to act as a stepping stone between the viewer and the information fields shared within the card.  Our goal is to direct people into further interaction rather than act as a static landing page, so we’ve kept it simple and consistent.

We just launched our minimum viable product last week and will be continuing to many more features to social cards over the next few months.  Our early adopters will play a major role in our development so please feel free to come try out the beta site here.

We are pleased to announce that the public beta site is now live at cahoots.com.  You can now create an account and use the site. After months of blogging and developing we have launched our minimum viable product and will be continuing to refine the site and will be adding lots of features.

We are introducing the concept of  Social Cards to the online community.  While we were busy building something else, we noticed how fragmented online presence was becoming with people and brands using a variety of social media channels in addition to websites and blogs.  At the same time business cards have still not become high-tech, despite their importance in networking and sharing contact information.  So we created something similar to an online business card, but called them social cards because they can be used in a much broader variety of ways than traditional paper business cards and for many purposes.  A social card could be created for personal use, professional, a brand, an event, or even a topic.  It is designed for simple, condensed, and quick sharing of social information.

The first version of the site is not full-featured, but is completely usable and 100 percent FREE.  We will be rolling out other features and options rapidly and will be launching the mobile version and application soon as well.

At present, our site is fresh and millions of usernames are available, so if you have a particular username you would like to have we suggest creating a social card snapping it up before it’s gone!

How To Write Killer Headlines for Social Media

So you’ve crafted a piece of content to share with the world.  Now you have to get them to read it.  Even a book of a thousand pages has to come up with a single clever title to sell itself.  Garnering the attention of readers is more competitive than ever as content sharing platforms increase in popularity and more and more businesses are employing content marketing strategies.  Headlines need to draw attention to your topic, deliver a message, make a promise, and attract the right readers to read the entire copy.  When it comes to social media there is more competition, more research that can be done, and you can use more than one headline.  Here are some facts, tips, and tricks for writing killer headlines for social media:

Important Aspects of a Good Headline:

Chris Garrett published a useful list titled ‘102 Awesome Headlines for Social Media‘ that can be viewed and downloaded here.

Although attracting readers has become more competitive, it has also become easier to research and measure the effects of your headlines.  With print media such as magazines you cannot try multiple headlines on the same audience: you pick one, it gets printed, and you hope for the best. With platforms like Twitter and Facebook you can share your content more than once (preferably not back to back) and see which headline garners more attention.  For example, we published an article titled ’10 interesting stats about moms and social media’ and shared it, also publishing it elsewhere under the title ‘Moms dominate social media’.  The latter title was a hit while the first title has better SEO, but sparked a little less curiosity.

Each social media platform has its own mood, and the headline you use for one may not suit another.  Below is an example of how a headline for a blog post may be re-packaged for different platforms:

With all of the different ways to share your content these days the quest for the perfect title is both easier and more competitive.  We hope this article has helped you create shareworthy content.

The answer is cats of course. Funny cat pictures are the secret to viral content.    Just kidding (sort of…).

If there was a simple, surefire way to make your content go viral everyone would be doing it.  Having something go viral to the same degree as the YouTube video ‘Gangnam Style’ is rare and impossible to plan, but there are some things you can do to create virus worthy content and trigger the infection.

Viral content always has one or more of the following characteristics:

Cats fit three of the above: humor, cuteness, and universal appeal (people all over the world keep cats as pets). 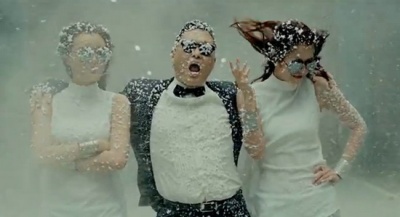 The YouTube hit ‘Gangnam Style‘  features the Korean pop singer, Psy, dancing in various locations in the Gangnam district of Seoul, South Korea- an area known for being high-class and luxurious.  Therefore, dancing around Gangnam like a horse was surprising, humorous, and novel. Psy was already famous in South Korea, which helped trigger the viral wave that sent the music video all around the world. The most powerful characteristic of the music video is the dance, which resembles riding a horse.  The dance has universal appeal that transcends language barriers, is very actionable, and allows people to bond over it.  The video  has had over 1.5 billion views.  Of course Psy and the producers of the video were not expecting or planning the level of international success that ‘Gangnam Style’ has attained, but it does have many of the attributes of viral content mentioned.  Psy has acknowledged that it is unlikely that he will ever be able to repeat that level of success with other videos- which points to the elements of luck, randomness, and spontaneity that contribute to virality.

The French have a saying for this intangible quality:  ‘Je ne sais quoi’ (which translates to ‘I don’t know what’).  We can’t help you find out what your magic ingredient is, but we can offer some advice on crafting contagious content:

Once you have checked your content to see that it has one or more of the attributes of viral content, it is time to edit. It is easy for simple flaws to decrease content virality, such as an obvious spelling mitsake, broken link, or missing picture.  Pay some attention to the packaging before you ship it.

Last but not least you must pull the trigger and share the content.  Remember to share your content through more than one channel, such as Twitter, Facebook, Pinterest, or Reddit.  This increases the probability that your content will find the right audience who will circulate it for you.  If you find that no one is sharing your content after all your efforts it may be time to acknowledge that this particular piece of content just didn’t have the ‘it’ factor or was poorly timed (Did someone else beat you to the topic? Is someone delivering the same idea in a more clever manner than you?).  After some reflection it is time to get up and try again.

Cartoon by Dave Coverly of speedbump.com

Today’s moms are more connected than ever, acting as leaders and early adopters in social media and technology. Moms are 20 percent more likely to use social media than the general population (BabyCenter).  Women are bigger multitaskers than most men, and women with children are constantly juggling their personal aspirations, parenting, and social lives.  Therefore, it should come as no surprise that moms are embracing social media, using it to manage their busy lives, connecting on the go, seeking information and recommendations, and accessing it on a variety of devices.  In celebration of Mother’s Day 2013, here are 10 amazing statistics on social mommies:

5.  Moms are 61 percent more likely to visit Pinterest than the average American. (Nielsen)

7. Moms are 58 percent more likely to use a mobile device for shopping. (BabyCenter)

8. In 2014, a projected 63 percent of all online moms will read blogs at least once a month (NextWeb)

9.  89 percent of online moms use their smartphones to check social media. (CommPro)

10.  70 percent of moms claim that technology helps them be better moms. (Forbes)

Why do moms love social media? Here are some of the most commons reasons moms go social: